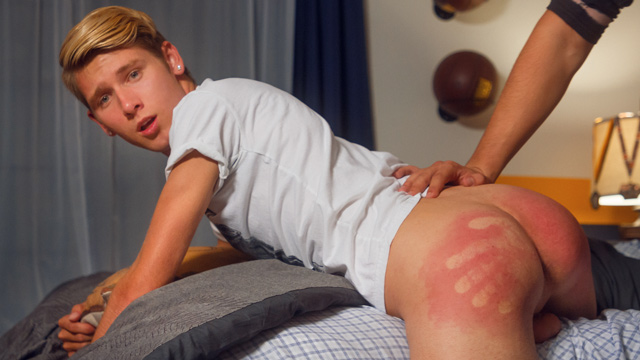 Hot hunk Josh Brady has been missing money from his room over the last few weeks. It’s obviously one of his roommates; so, he’s been anxiously waiting to catch the culprit. He finally spies Julian Bell jacking some serious cash from his wallet and now Brady is ready exact his revenge! After weeks of waiting, Brady’s extra aggressive, immediately taking back his property and turning Bell’s backside into HIS property! The sexy stud spins the thief around so his pretty face is eating mattress while he whacks away at the kid’s caboose. Some smacking good tush torture does the trick and Julian confesses to every time he’s stolen from the heavy handed hunk. Josh makes a deal with the boy, one spank for every dollar. Shockingly, Bell confesses to even MORE cash crimes! The kid MUST be enjoying the porny punishment and we can see Brady DEFINITELY takes pride in his work, so it’s the perfect combo for us! By the time Josh takes the blond’s shorts off, the kid’s can is tomato red, ripe and ready for more! Brady asks again and Julian confesses to jacking a hundred bucks! This is music to his ass master’s ears and Brady makes good on his promise to match the thief’s dollar amount. The peaches and cream anglo teen’s tight end winds up a bright, beautiful red and the thought of his hand branded onto the boy brings Brady sweet satisfaction as he kicks the kid out of his room.